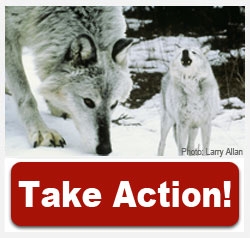 Wolves in Wyoming need your help.

Right now, the Obama administration is considering sealing a deal with the state of Wyoming that would allow wolves in 90% of the state to be killed. They could be shot on sight, trapped, or even chased to exhaustion and exterminated by anyone, at any time, for any reason.

Entire packs of wolves, including pups, could be gunned down from low-flying planes for sport. But we have one last chance to stop this from happening. Take action now to protect Wyoming's wolves from this fate.

These amazing icons of the Rockies have been struggling to survive for over a century. They've been subject to ruthless hunting and had their habitats destroyed, leaving them isolated and threatened. They have been considered an Endangered species for years.

Thanks to conservation efforts, wolves in the Rockies are now making a comeback. There are now almost 340 wolves in the state, and the population is growing. In turn, a healthy wolf population helps maintain the balance of the local ecosystem.

But this deal would reverse this trend, removing wolves from the Endangered Species list in Wyoming and protecting only the wolves in and around a few protected areas like Yellowstone National Park. Wolves everywhere else in the state could be hunted down without mercy.

We still have the opportunity to stop this and save Wyoming's wolves. The Obama administration is listening to public input about this issue. Send them your comment now and tell them that we need to protect Wyoming's wolves.

We need a plan to manage Wyoming's wolf population. But it should be a plan that protects wolves, and uses the best science possible to maintain the delicate balance of Wyoming's unique wilderness -- not a plan that allows open season on wolves.

Thanks for all you do to protect the environment.

P.S. We want to flood the Obama administration with comments in support of wolves. Please take a moment to share this alert, or spread the word on Facebook and Twitter: