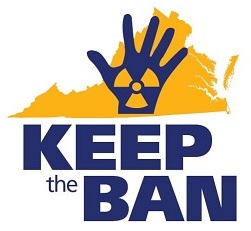 This past year the Sierra Club, working with the Keep the Ban coalition collected more than 10,000 signatures in opposition to uranium mining in Virginia.

Of course, we didn't fly state legislators to Paris like Virginia Uranium, Inc.  And if we had the money, we'd take them to an Indian reservation in the Southwestern United States where the water and land have been contaminated by uranium mining, not to Paris.

Click here to urge your legislators to oppose uranium mining.

It's people power vs. polluters' money in this Virginia uranium mining fight, and people power won the 1st round when public opposition to mining convinced the General Assembly that the issue was too radioactive to consider in 2012.

Studies by the National Academy of Sciences and the City of Virginia Beach raised serious concerns about the safety of mining uranium in such a wet climate up river from more than a million people in Hampton Roads. Sadly, that did not keep Governor McDonnell from riding to the rescue of Virginia Uranium, Inc.  When it was obvious that the General Assembly would not take up a bill to repeal the ban, McDonnell established his own Work Group to move forward with development of a regulatory framework for mining.

The Gang that Don't Shoot Straight
The good news is that the Work Group has been discredited through the McDonnell Administration's own ineptitude. At the announcement of the Work Force, a spokesperson announced that the proceedings would be closed to the public. When that approach generated heat from the public and the press, the Governor held a hastily called meeting for critics, so hastily called that many of us could not make it.  Then McDonnell's people advised the press that they could attend but not ask questions.  One of the key public communication mechanisms from the Work Group was supposed to be a website that for several months did not have a functioning comment page.  The failings of the Work Group continue to mount with defective meeting notices, prompting one observer to refer to the group as "the Gang that don't shot straight."

Stop the End Run
As we go to press, we are preparing for a public meeting by the Governor Work Group in Chatham, VA where the mining is proposed. Sierra Club and the Keep the Ban coalition are working to turn out at least 100 opponents at this June 18 meeting.

What you can do!
Members of the Virginia General Assembly, your Senator and Delegate need to hear from you.

Click here to urge your legislators to oppose uranium mining.

Thank you for continued support on this very serious issue,

P.S. For additional ways you can help keep the ban visit our website at vasierraclub.org/uranium.