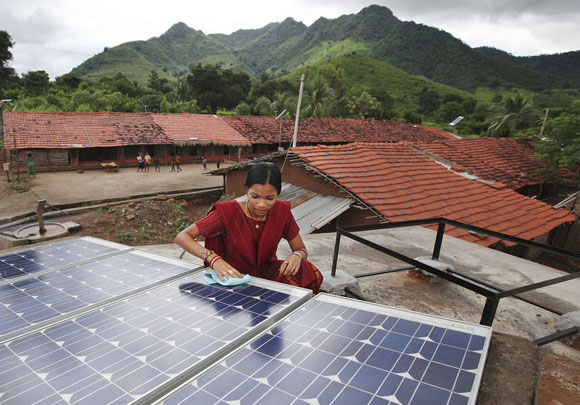 A while back I wrote a post on the need to get India's solar boom right. I wrote it because it was obvious that solar energy was primed to take off in India and it was clear there were two paths the country could take – distribute that boom to benefit the 300 million people still waiting for the grid, or forcibly centralize a resource that is most effective when distributed. Now a year later installations have grown at a blistering pace - from 80 MW a year ago to over 1 GW but they are almost entirely centralized. As Indian states line up exciting new solar policies the central question remains: To centralize or not to centralize?

Let's start with hard reality: The grid is never coming to rural India. No matter what 'very serious policy makers' want to believe, decades of attempts and huge gains in supply have yielded little increase in electrification. More importantly, off grid solar installations have been dramatically cheaper than grid extension for a while because they compete with the huge costs of extending the grid and the huge costs of diesel and heavily polluting kerosene. That's why the future of rural electrification is decentralized clean energy something even the very serious IEA recognizes.

But it's not just the IEA that gets this; politicians are catching on as well. Take Nitish Kumar the chief minister of Bihar whose sole political platform is delivering energy access to the 100 million people of Bihar. To achieve this lofty goal (only 18% of the population currently has access) Bihar’s going to need a distributed clean energy revolution because coal-gate has deepened the already immense problems of the coal sector making the possibility of a coal fired future impossible. If Kumar wants to remain in office, he has to rely on distributed solar.

And, of course, distributed grid tied installations reduce peak load which can help avoid blackouts. You know, like the historic one India just suffered. In short, distributed is the way to go.

But despite the clear benefits of distributed solar a wave of recently announced solar policies have failed to internalize its importance. From Uttar Pradesh (UP) where 1 GW of solar is planned for 2017, to Andhra Pradesh where a slew of tax benefits and reduced charges will help meet its Renewable Purchase Obligation to Tamil Nadu where a whopping 3 GW are planned by 2015 it's not at all clear that distributed installations will dominate deployment (except perhaps in Tamil Nadu).

Instead they may go the way of Gujarat where the solar boom really began and large scale, grid tied solar farms are the norm. Many have cheered this on because 'big projects' drive 'scale.' But do they?

The US finally got around to totaling our solar installations and we were surprised at what we found. All those small scale distributed installations financed by third parties like Sungevity have added up to something really big – 2.5 GW which represents about 70% of all US installations. So here's a lesson for all those who love scale: Small is big.

Despite the 'Gujarat effect', there are signs that India is beginning to recognize the importance of distributing all that solar. The Union ministry recently announced a new program that will subsidize rooftop solar installations by 30%. And even centralization happy Gujarat has a rooftop policy in the works. Add to these positive steps the potential for third party finance from institutions like the IFC and India could have a distributed solar revolution on its hands that would deliver social benefits that would cascade throughout society.

But India will only get one chance to get its boom right. Squandering an opportunity to build a robust grid that avoids blackouts while lifting 300 million people out of energy poverty is simply not an option. As the National Solar mission enters its second phase the country has the opportunity to drive financing and boost deployment of distributed solar. Now is the time to steer this ship away from its centralized mooring towards a distributed clean energy revolution. Because how solar is deployed, is just as important to India as whether its deployed at all.