One Coal Plant Retired Each Week in 2012


SAN FRANCISCO, CA – Over the past twelve months, the nationwide campaign to phase out coal burning in the United States continued to win victories from coast to coast, including securing dozens of coal plant retirements and record investments in wind and solar. Facing unprecedented public opposition, the coal industry experienced numerous setbacks in 2012 as its market share fell and stock prices tanked.

With an overarching goal to move America off coal and slash carbon pollution, an unprecedented coalition including Sierra Club and more than a hundred local, regional and national organizations has helped to secure the largest drop in U.S. coal burning ever. The campaign now includes legal and grassroots fights targeting every stage of the coal lifecycle in more than forty states and has grown to become one of the largest and broadest grassroots environmental campaigns in the nation’s history.

The year saw 54 existing coal plants retired or announced to retire, an average of one plant per week. Meanwhile, no new coal plants broke ground this year, marking the end of the coal industry’s decade-long “coal rush,” a highly controversial Bush-era plan to build more than 200 new coal plants and lock the nation into a dirty, coal-fueled future. Opposition from community members nationwide prevented the construction of 174 proposed coal plants, including 13 in 2012 alone.

The decline of the coal industry’s fortunes was evident in the marketplace as well. In 2012, many investors lost big on coal, with numerous bankruptcies of coal mining companies and coal-burning utilities including Midwest Generation in Illinois, Patriot in West Virginia, and Dynegy in Texas. After declaring bankruptcy, Patriot – Appalachia’s third largest coal company – reached an agreement with the Sierra Club and its allies to end the practice of mountaintop removal coal mining and retire much of its large scale surface mining equipment. The poor economics of coal were epitomized by the news that the Great River Energy Spiritwood coal plant in North Dakota has sat idle since it was completed at a cost of $440 million earlier this year.

But coal’s downward spiral in 2012 is only half the story. With help from the Beyond Coal campaign and its allies, the wind industry hit 50,000 megwatts of installed capacity nationwide, and today more than ten states get at least ten percent of their electricity from clean, renewable wind power. Similarly, solar made significant headway, and in the first nine months of 2012 solar power increased 80 percent over the same period in 2011. By year’s end the solar industry is projected to install 3,200 megawatts. Through September 2012, the U.S. now has enough solar and wind installed to power more than 12 million homes.

“This grassroots campaign is doing something no one thought was possible,” said Bruce Nilles, Senior Director of the Sierra Club’s Beyond Coal campaign. “At this pace, we are on track to end the scourge of coal burning in the United States within the next two decades. Every coal plant retired means less mining destruction, less air and water pollution, and a better chance to prevent runaway climate disruption.”

“The health of our families and our children are the big winners in 2012,” said Mary Anne Hitt, Director of the Sierra Club’s Beyond Coal campaign. “Through landmark pollution standards and a decline in coal power, millions of Americans have cleaner air and water, our children are safer from toxic chemicals, and we’ve laid the building blocks for averting future climate disasters.”

Launched in 2002, the Sierra Club’s Beyond Coal campaign is working to 1) stop the construction of new coal-fired power plants, 2) retire the country’s existing coal plants and replace them with clean energy no later than 2030, and 3) keep US coal reserves underground and out of world markets. 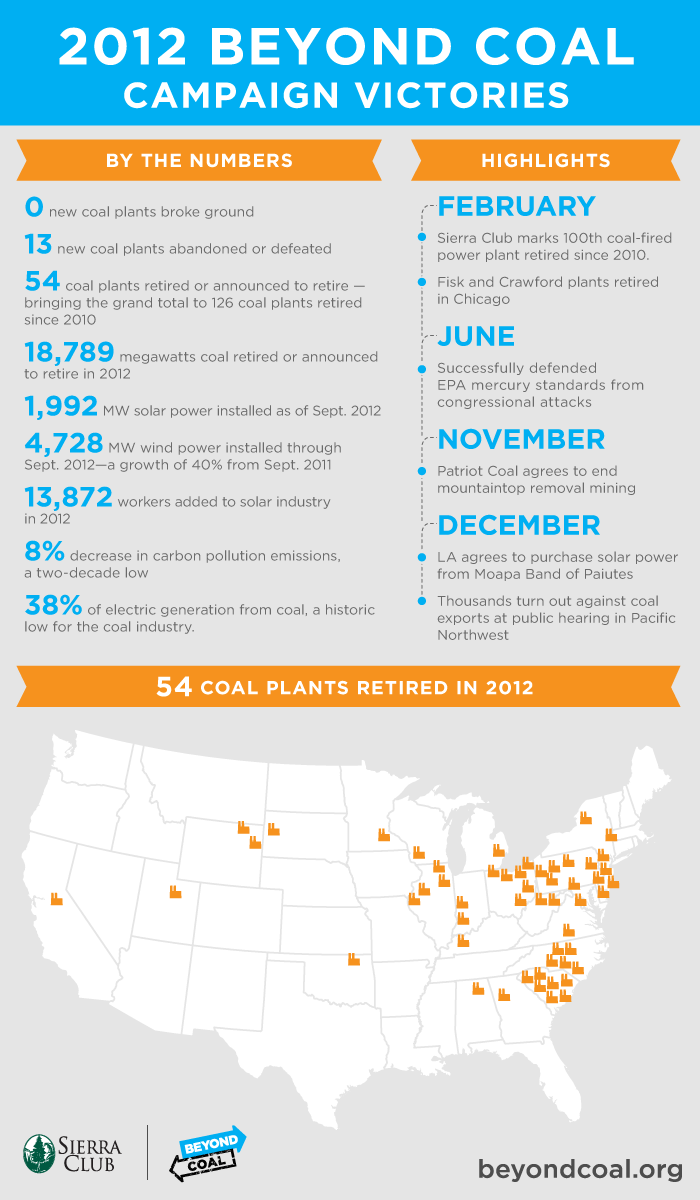